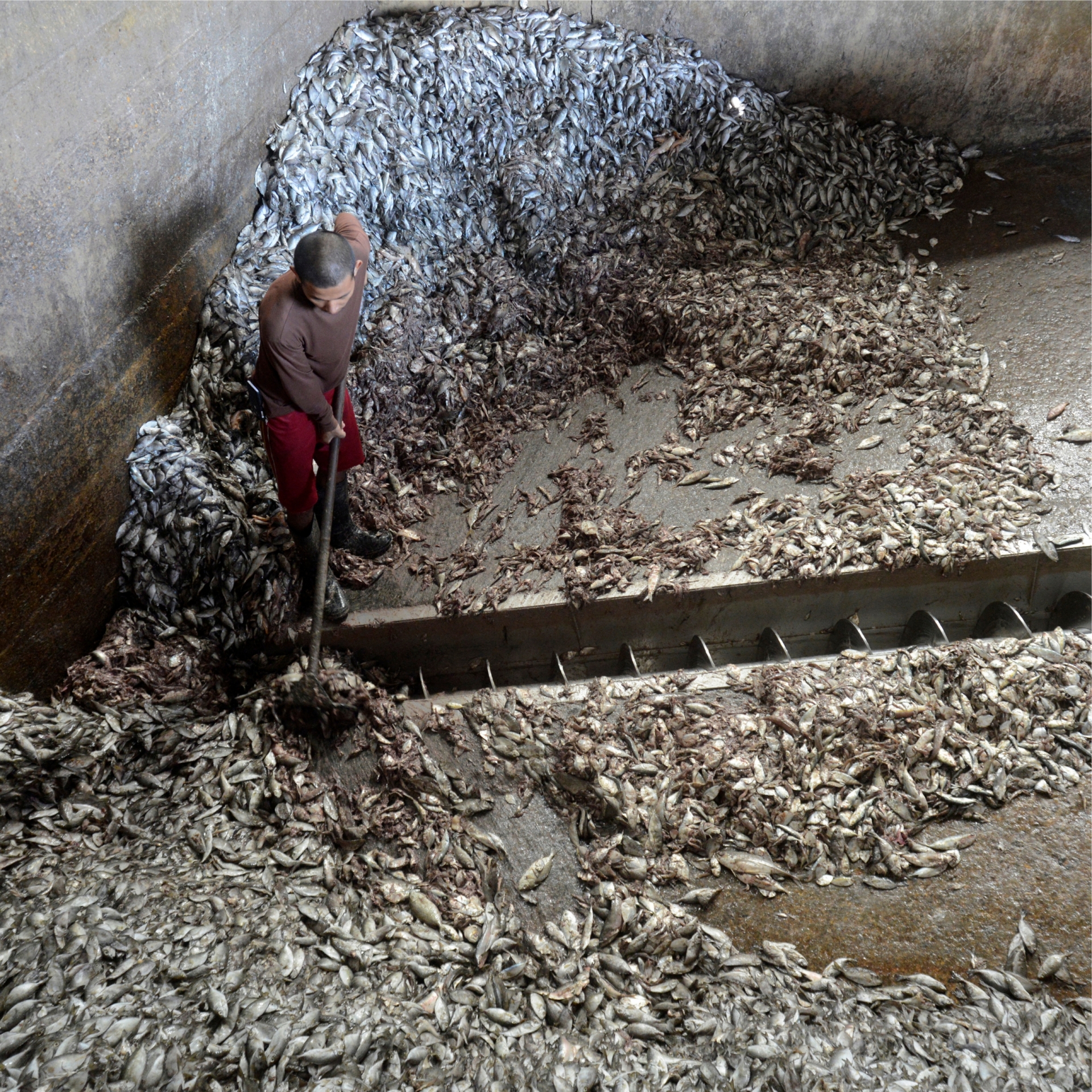 What does a farmed salmon eat? Lots of nutritious wild fish…

Salmon are farmed using fish oil and meal made from millions of tonnes of wild-caught fish most of which are food-grade.

Based on current practices, farming salmon demands wild fish for feed. But what if we ate some of those wild fish directly instead and only used byproducts (the heads, bones and other trimmings) left over from fish processing in salmon feed? How about if we added some mussels or carp—aquaculture species that don’t rely on wild caught fish for feed—to our plates too?

Building on our previous work on farmed salmon, these are questions that Feedback, along with a team of scientists from Cambridge, Lancaster and Liverpool Universities set out to answer in a study recently published in PLOS Sustainability and Transformation.

Highlighting some stark ecological and social inefficiencies surrounding the production of farmed salmon, the analysis shows that if we removed whole wild-caught fish from salmon feed and made some changes to the types of seafood we eat, we could leave millions of tonnes of fish in the sea and produce more nutritious seafood at the same time. We could even still eat a little farmed salmon.

Often presented as a way of relieving pressure on wild fish stocks and providing much needed nutrition for a growing population, aquaculture is the world’s fastest growing food sector. But some aquaculture species, like Atlantic salmon, are farmed using fish oil and meal made from millions of tonnes of wild-caught fish, most of which are nutritious food-grade fish that could be eaten directly instead.

We know salmon farming’s (continued) dependence on wild caught fish is unsustainable—ecologically and socially—in terms of the quantities of wild fish it requires to grow a kilo of fish and the fact that, fueled by the industry’s rapid growth over the past two decades, fish for feed are increasingly caught off the coast of West Africa, where there is increasing evidence that this is impacting both livelihoods and food security.

Looking at Scotland’s salmon industry specifically, the third largest worldwide and the UK’s largest food export by value, what’s novel about this research is its focus on the transfer of micronutrients from the wild fish fed to farmed salmon. Placed fourth in terms of the ‘big five’ fish species (cod, haddock, tuna, salmon and prawns) consumed in Britain, (farmed) salmon is marketed as being a rich source of important vitamins, minerals and fatty acids. And it is. Interestingly, however, many of the wild fish fed to farmed salmon have even higher concentrations of key micronutrients than their farmed counterparts

So, what happens to those essential micronutrients when these ‘feed’ fish are eaten by salmon? It turns out a huge proportion are a lost. More than half (!), in fact. In some cases, up to 99%! In other words, farming salmon, from a nutritional perspective, is an inefficient way of delivering required micronutrients to human diets.

Prawns aside. the ‘big five’ fish species currently favoured by British consumers are all just that, big, high trophic species. In contrast, many of these ‘feed’ fish are small – think herrings, sprats, sardines, and anchovies. So, what if we were to eat some of these small ‘feed’ fish instead? To investigate this, three alternative production scenarios were developed whereby farmed salmon were only produced using fish byproducts, and then more wild-caught fish, mussels or carp were added for human consumption. All alternative production scenarios produced more seafood that was more nutritious than farmed salmon AND left 66-82% of feed fish in the sea.

Based on findings on the Scottish salmon industry, theses alternative scenarios were then applied at a global scale. One scenario shows that farming more carp and less salmon, using only feed from fish byproducts, could leave 3.7 million tonnes of wild fish in the sea while producing 39% more seafood overall. So now we’re talking a socio-ecological win-win-win! More and better fish on our plates, and more in the sea.

These findings show salmon farming, in its current form, is not only an inefficient way of producing good food but quite irrational from a social and ecological standpoint – in terms of human nutrition and food security, unnecessary pressure on fish stocks, and overall fish production. Removing whole wild caught fish from aquafeed would go some way to mitigating these impacts.

Aquaculture will have an important role to play in terms of meeting global food demands in a manner which is sustainable – indeed, a key aspect of this study is that it does offer more sustainable alternatives. However, until marine-fed aquaculture, such as intensive salmon farming, moves away from using whole wild fish questions will remain regarding the extent to which this can become a reality.

In its current guise certainly, the ‘unpaid’ environmental and social costs of farming salmon for high income markets means this mode of production is not only unsustainable but raises serious ethical questions as well.

What can you do next?

DONATE AND WE’LL CONTINUE TO FIGHT FOR BETTER FOOD
How long does it take: 30 seconds

Feedback never accepts donations from corporate organisations. To achieve our goal of a food system that nourishes us and the planet, we need your help.

DONATE WHAT YOU CAN NOW
SIGN UP TO HEAR FROM US
How long does it take: 15 seconds

Choose from the options below to share this easily in a couple of clicks.